Symbols of our democracy

An abstract close up of the mace in its cradle in the Debating Chamber [Source: Office of the Legislative Assembly]

The Mace of the Legislative Assembly In ancient times the mace was a wooden weapon of war similar to a club. During the fourteenth century, the mace, by then made of precious metal and covered with jewels, had become the symbol of the King’s authority. Since the seventeenth century the mace has become an icon of a Parliament, in particular a symbol of the authority of the Speaker.

The Assembly’s mace is a gift from the Australian Region of the Commonwealth Parliamentary Association and was officially presented to the Speaker, Mr Wayne Berry MLA, at the 35th Presiding Officers and Clerks Conference held in Melbourne on 9 July 2004.

The mace is 95cm long and weighs approximately 8.5kg and was designed and manufactured by the local company, Designcraft. The body of the mace is divided into three sections, representing the 'Y' plan which was adopted by the National Capital Development Commission in 1967 to guide the urban development of Canberra. The spine is made of stainless steel and the locally sourced Yellow Box timber used on the mace is not a traditional cabinet making timber but was selected to complement the joinery detail within the Legislative Assembly chamber.

The detailed carvings on the mace of the Wahlenbergia gloriosa (Royal Bluebell), which is the floral emblem of the ACT, were undertaken by local craftsman Myles Gostelow.

The Assembly’s mace is a blend of traditional symbolism and contemporary lines and material representing the modern, forward looking feel of today’s Legislative Assembly.

The Serjeant-at-Arms carries the mace upon the right shoulder and places it at the end of the Clerks’ table on its brackets at the start of each sitting day, leading the Speaker into the Chamber. The Speaker then reads the prayer or reflection and the day’s proceedings may begin. Traditionally, the mace is placed with the larger end pointing towards the government and remains in this position throughout the sitting. At the conclusion of the sitting the Serjeant-at-Arms, bearing the mace, once again precedes the Speaker out of the chamber.

A close up of an original copy of the Armorial Bearings of the City of Canberra [Source: NAA / PIC P583 Album 827]

The Armorial Bearings of the City of Canberra 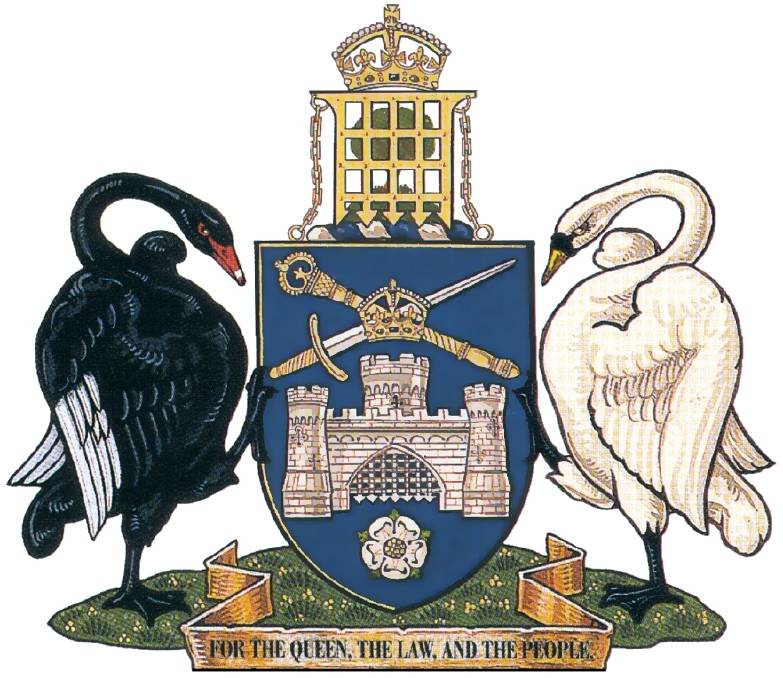 The creation of the Armorial Bearings (Coat of Arms) of the City of Canberra originated from a request by the Commonwealth Department of Defence to the Commonwealth Department of Home Affairs and Territories in July 1927. The request was made so that the Coat of Arms could be used on the newly commissioned ship, HMAS Canberra. In August 1927 the Federal Capital Commission (FCC) announced a competition to design a Coat of Arms for the FCC and for the City of Canberra.The chosen design, drawn by Mr C R Wylie, was sent to the College of Arms, London, in April 1928. After a few modifications, the Coat of Arms was granted by the College in pursuance of a Royal Warrant dated 8 October 1928. The Arms and a Crest were granted on 7 November 1928 (the use of Supporters was granted on 9 November 1928).

Features on the armorial bearings

An abstract close up of the Australian Capital Territory flag

Flag of the Australian Capital Territory

In competitions held in 1988 and 1992, artists and interested citizens provided a large range of designs for consideration as the proposed Australian Capital Territory flag.

Although there was no general agreement within the community on a particular design, there were some features in common amongst the entries. These elements were incorporated into four design options presented by the Members of the Legislative Assembly to the ACT community for its consideration in February and March 1993.

The ACT Electoral Office reported that the most popular choice among ACT citizens who expressed preferences on any of the four options was a design featuring the Southern Cross and a modified form of the Canberra City’s Coat of Arms. As a result, the Chief Minister (Rosemary Follett) put the following motion which was passed by the Legislative Assembly for the Australian Capital Territory on 25 March 1993:

That this Assembly, noting the outcome of community consultation on a flag for the ACT, adopts the design featuring the Southern Cross and a modified form of the Canberra City’s Coat of Arms, as the official flag for the Australian Capital Territory

The colours of blue, gold and white were chosen because:

The choice of colours maintains existing traditions, reflects a link with national history and preserves heraldic tradition and practice.

The Gang-gang Cockatoo (Callocephalon fimbriatum) was adopted as the faunal emblem for the ACT on 27th February 1997.

Canberra is the only city in Australia where these distinctive ash-grey cockatoos are residents. During winter small flocks are common in the established gardens around the city where they feed on pine cones and firethorn and hawthorn berries. They often become so engrossed in feeding that observers can get close enough to admire their beautiful plumage. They are creatures of habit and will return to the same tree or bush each day until the food supply is exhausted.

In summer most of the flocks return to the mountain forests to breed in tree hollows and eat eucalyptus and acacia seeds, as well as the seeds of the native pine, Callitris. Their call is a distinctive sound resembling the sound of a squeaking gate and they display a bouncing flight pattern.

On 26 May 1982 it was announced that the floral emblem for the ACT would be the Royal Bluebell, Wahlenbergia gloriosa.

The genus Wahlenbergia, which belongs to the family Campanulaceae, was named in honour of G.G. Wahlenberg (1780-1851), a Professor of Botany at Uppsala, Sweden, and the species name gloriosa is Latin, meaning ‘superb’ or ‘glorious’.

Wahlenbergia gloriosa is restricted in distribution to the high mountain areas of the ACT, south eastern NSW and eastern Victoria.

In cultivation it is a frost-hardy ground cover, flowering in Canberra from late October till February. It does best in light soil enriched by organic material, in a sunny or semi-shaded situation. The soil should be kept moist but not waterlogged.

It should be remembered that the Royal Bluebell is protected in the wild and should not be picked or collected. Ethos (1961) by Tom Bass (1916-2010), is a copper statue situated significantly outside the entrance to the ACT Legislative Assembly. Ethos is a classic example of Tom Bass’ totemic sculpture that celebrates pride and community. It was commissioned by the National Capital Development Commission in 1961 and was co-sponsored by the Canberra Chamber of Commerce.

Unveiled in 1962, Ethos is made of copper. The winged female figure is robed in embroidered cloth woven with emblems and figures representing the community. She stands in a dish bearing a relief map of Canberra and holds aloft a bursting sun representing the emerging city's culture and enlightenment.

I am / the original spirit / and the spirit of now

I rise from the earth / and reach for the sun

I bring together / the old and the new

I am the love / peace and beauty / of this place

I give you / these things / every day / and always

Return to the resources page